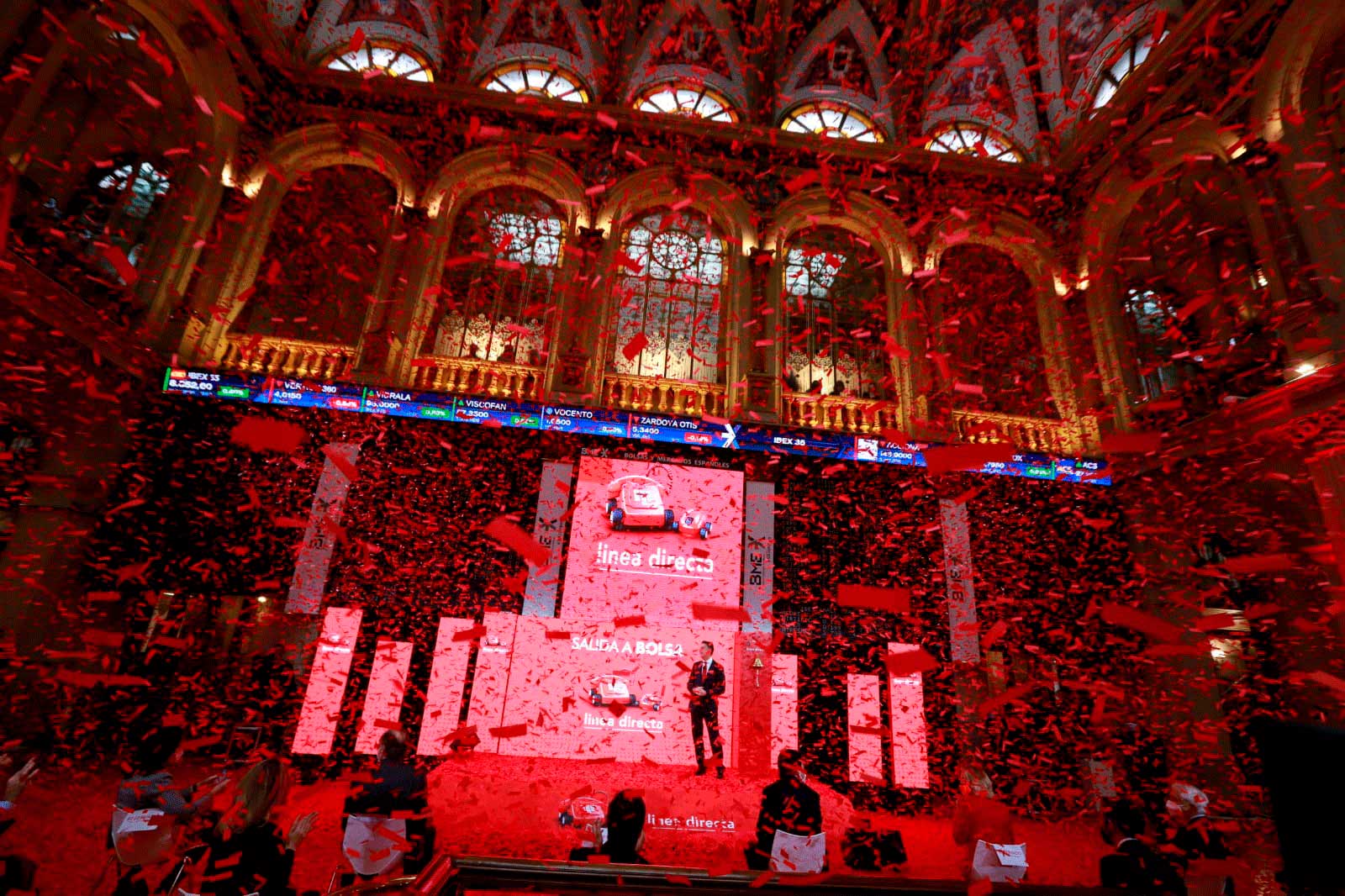 Madrid, 29 April 2021.- Over the past 26 years, Línea Directa Aseguradora has built up a reputation as a case study in success and innovation in the Spanish insurance sector. Today, the Group takes a step further in that direction by becoming the first company to go public in Spain in 2021, reaching for greater opportunities and prominence to keep growing above market rates uninterruptedly and profitably, generating value for its shareholders.

Línea Directa will be listed on the Barcelona, Bilbao, Madrid and Valencia stock exchanges under the ticker “LDA”, becoming the third Spanish insurer to go public.

Following receipt of the pertinent regulatory authorisations, Línea Directa Aseguradora's debut on the Spanish stock exchanges is testimony of its size and profitability and a clear reflection of its plans for growth and diversification, highlighting its appeal as an investment option. The company is listed at a reference price of € 1.3175 a share, putting its total valuation at € 1.434 billion.

The operation has not been carried out via an IPO, but rather via a listing, so that Bankinter's 57,000 shareholders received, on 28 April 2021, a share of Línea Directa Aseguradora for each Bankinter share they owned at the time, meaning that 82.6% of Línea Directa's capital was shared amongst them. Bankinter, until then Línea Directa's sole shareholder with 100%, keeps the remaining 17.4%.

Miguel Ángel Merino, CEO of Línea Directa Aseguradora, says: “We are very proud to become the third Spanish insurance company to go public. The company is committed to sustaining an elevated remuneration for shareholders, developing a strategy of organic growth - always one step at a time -, and of profitable growth, in keeping with our excellence in risk management and commercial strategy”.

Going public in a spin off from Bankinter seeks to reinforce Línea Directa Aseguradora's business. The company will have full autonomy to operate with a capital structure and dividend policy completely adapted to its profile and that of its shareholders. Direct access to capital markets will allow the company to explore new avenues of growth, diversifying its financial sources, and strengthening and institutionalising its relationships with both internal and external stakeholders.

In the words of Carlos Rodríguez, Línea Directa's CFO: “We have demonstrated over the years that we reach the goals we set, that we are able to sustain high levels of remuneration for our shareholders, in the form of dividends, and that we are capable of guaranteeing excellent rates of solvency. Since 2009, we have paid € 1.207 billion in dividends. We will continue to grow above market rates, just as we have been doing so far (even through adverse economic landscapes), and we will do so more efficiently and profitably”.

Línea Directa Aseguradora aims to keep gaining market share year by year, especially through the consolidation and growth differential of its Home and Health business lines, and making it into the top ten of non-life insurance companies in Spain in the medium term. Financially, the company expects its profitability and shareholder remuneration ratios to remain unchanged.

Up to 98% of Línea Directa's revenue comes from its insurance premiums, and does not depend on financial income, which is being punished at the moment given the current negative interest rates. Línea Directa is also among the most profitable and solvent insurance companies, with a 36% return on average equity (RoAE) during the last three years, a Solvency II ratio of 213% and an average combined ratio of 86% in the same period, seven percentage points under the average of its competitors.

The company, which currently has more than 3.2 million customers and an annual turnover of about € 900 million in premiums, is the fifth largest insurance company in Spain, with the highest market share in the car insurance sector. It also holds a strong position in Homes and Health, where it has been growing steadily above market rates. It is in both of these lines of business where most of the company's potential for growth is concentrated.

Innovation and disruption in its DNA

Línea Directa Aseguradora is leading the digital transformation of the insurance sector. Its commitment to technology and to a multi-channel approach in its customer relations has meant that more than 60% of the company's new policyholders have arrived through the digital channel and that 80% of its customers carry out policy-related arrangements online.

The company also espouses the new mobility paradigm and the solutions proposed by the Spanish automotive market. Beyond selling insurance, the company moves to guarantee mobility solutions at unbeatable prices, creating value for the insurance sector. Examples of this are ‘Llámalo X’, Póliza Respira or Línea Directa's exclusive replacement vehicles.