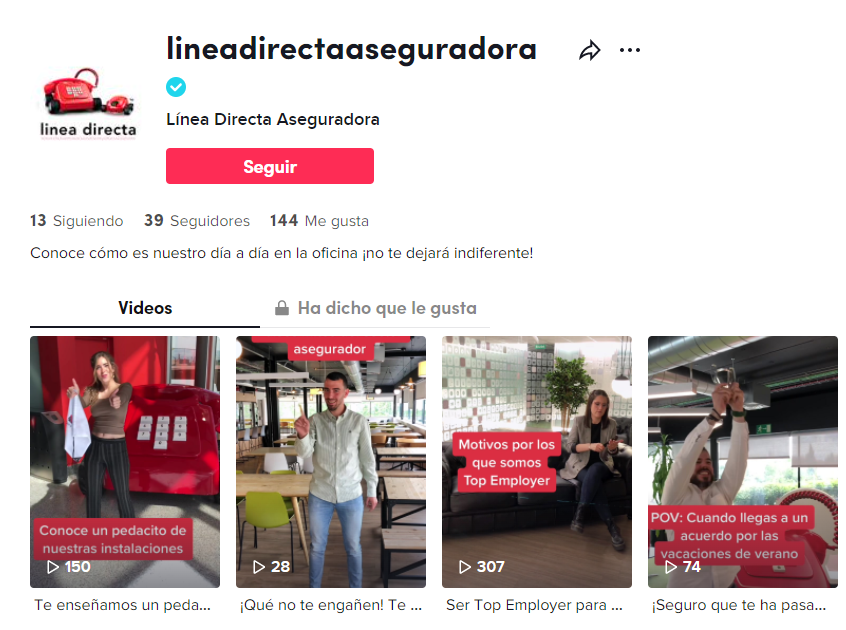 Madrid, 2 June 2022. Línea Directa Aseguradora continues to strengthen its social media presence with the launch of its own channel on TikTok (https://www.tiktok.com/@lineadirectaaseguradora), one of the fastest growing social media channels today, with more than 1 billion active monthly users worldwide. By joining the short-form video platform – part of the company's strategy to attract young talent – Línea Directa aims to showcase the company's day-to-day activities, its ethos and its attractiveness as an employer brand by embracing the communication, authenticity and freshness typical of TikTok content.

TikTok, the leading short-form mobile video platform, is growing rapidly and is already the fourth most-used social network in Spain, with nearly 10 million users. According to IAB Spain's "Social Media Study 2022", 30% of the country's internet users are on the platform – 13% more than at the end of 2020 – and one third of them are age 24 or younger. One feature this network is known for is the honesty and creativity of its user-uploaded content.

With this same spirit and the platform's unique style, Línea Directa Aseguradora seeks to bring the TikTok community closer to its ethos, including its culture, working environment, values and its commitment to sustainability. It also seeks to showcase the day-to-day at the Línea Directa campus, the Talent Communities, the professional development programmes and everything that makes the Group an attractive employer brand.

Línea Directa Aseguradora's presence on TikTok marks a further step in its strategy of attracting young talent, which is part of its wider talent attraction project, focused on providing the organisation with the best professionals to address the Group's current objectives and future challenges, including its digital transformation.

The digitization, together with the continuous improvement of efficiency, strong growth and customer focus are the four pillars of the strategic vision with which the company faces present and future challenges. To deal with them, Línea Directa Aseguradora will leverage its strengths, which it summarizes under the motto "The value of being direct" and which encompasses the 100% direct model, quality of service, complete products, commitment to innovation and a competitive price.