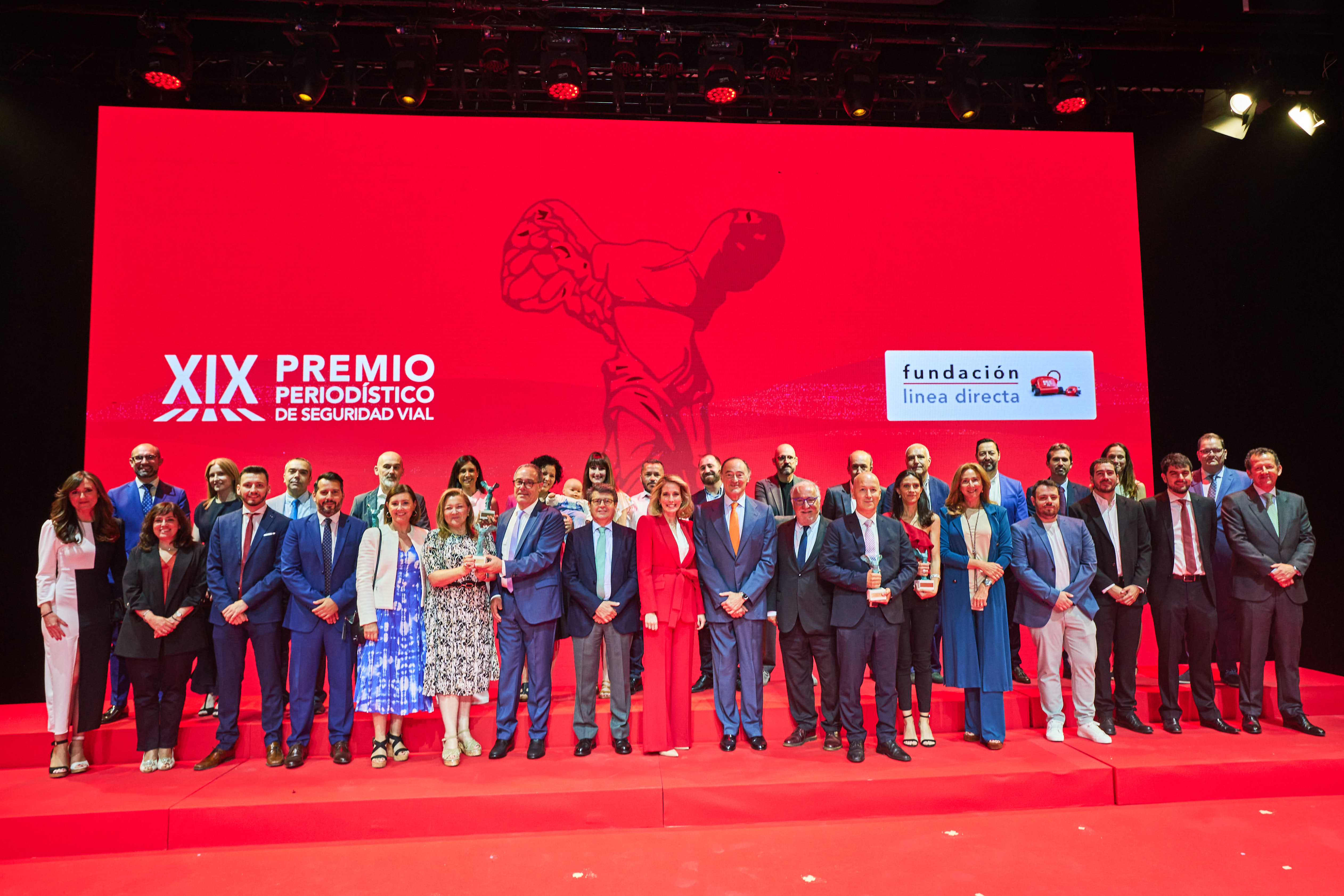 Madrid, 21 June 2021 – On 20 June, Monday evening, the Línea Directa Foundation held the awards ceremony for the 19th edition of the Road Safety Journalism Award. The ceremony took place at the Gran Teatro Príncipe Pío in Madrid and journalist Marta García Aller was the master of ceremonies. A reference among journalism competitions in Spain, the award recognises the work of road safety information professionals, always with the aim of encouraging responsible driving in society as a whole.

In this 19th edition, the winners in each of the three award categories have been: Juan Antonio Marrahí, from Las Provincias, in the category of Written Press and Online Media, for his work "Driving ages at a dizzying pace" (La conducción envejece a ritmo vertiginoso). Ana María Herrero, from Onda Cero Palencia, was chosen in the Radio category, for her report "Is there an age limit to drive?" (¿Existe una edad límite para conducir?), broadcast in the programme "Más de Uno"; and Beatriz Correal, from La Sexta, in the TV category, for the informative piece "The speed limit comes into force" (Entra en vigor el límite de velocidad). The winner of each category will receive €10,000 tax-free.

In the course of this gala, the Solidarity Award (€10,000 tax-free) was presented to the FEDACE (Spanish Brain Injury Federation), for its contribution to improving the quality of life of people who suffer brain injury, and of their families.

The winner of the Honorary Road Safety Journalism Award was also announced and wen to Enrique Hernández-Luike posthumously, for his excellent work disseminating and raising awareness throughout his extensive professional career at the head of the Luike Group.

Journalist Jon Sistiaga spoke during the gala, to stress the importance of the work done by media professionals through his professional experience as a war reporter, and encouraged road safety journalists to continue to focus on the human stories behind traffic accidents. He also recounted his personal experiences covering conflicts in various parts of the planet, such as Afghanistan, Iraq, Kosovo and Rwanda.

According to Patricia Ayuela, CEO of Línea Directa Aseguradora and Vice President of the Línea Directa Foundation, "life sometimes hits us with inevitable tragedies. But along with these situations, there are other challenges on which we can act. One of them is, without a doubt, the great silent tragedy of road deaths. On the road, on the pavement or in the bike lane, we can all do something, as we must bear in mind that 90% of accidents are caused by human recklessness".

Pere Navarro, Director General of Traffic, said that "the Línea Directa Foundation Road Safety Journalism Award is already part of the calendar of those of us who are dedicated to road safety. I believe that, to some extent, this event has helped to reduce deaths in traffic accidents, since it rewards the work of media professionals, who are key to improving the behaviour of all drivers".

The jury of the Road Safety Journalism Award

The jury, chaired by Pere Navarro and made up of various company, communication and road safety figures, has assessed more than 1,900 submissions based on criteria such as quality, awareness-raising efforts and approach. The members of the jury were: