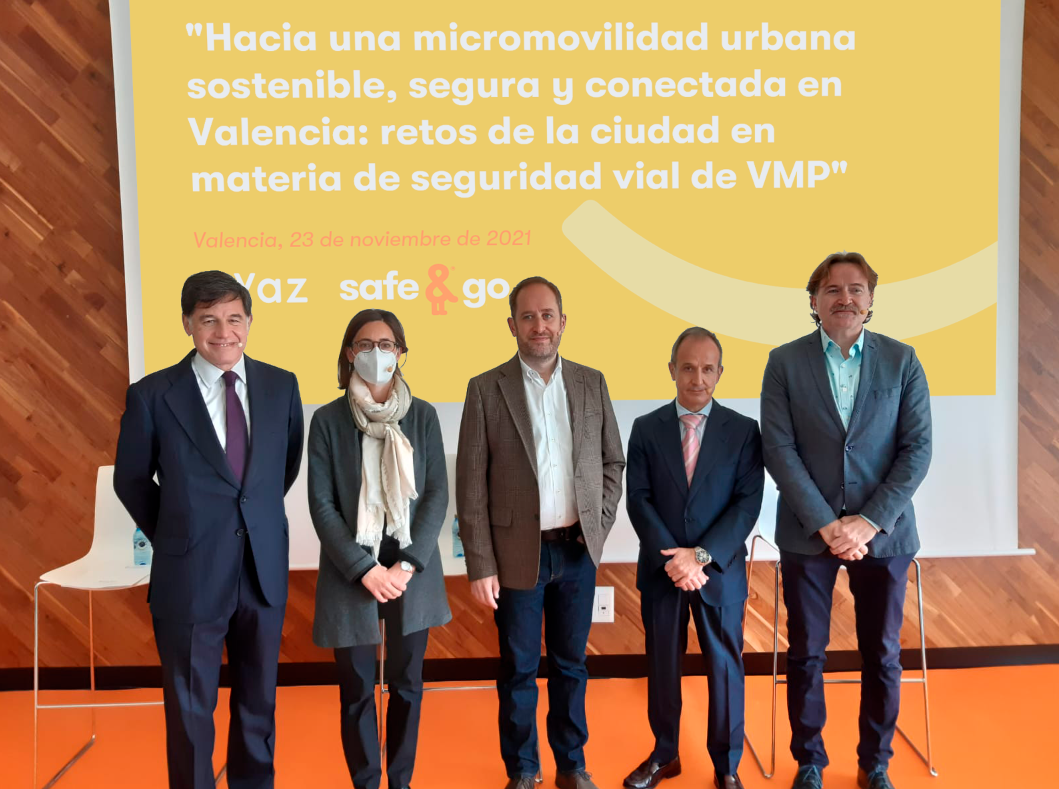 Valencia, 23 November 2021. Urban mobility has undergone a profound change in recent years and things like urban planning, transport, technology and its influence on road safety are now hot topics on the political and media agenda. Valencia, one of Spain's leading provincial capitals in the realm of mobility, faces the challenge of rethinking the city to make it more human, respond to the climate challenge and promote new forms of non-polluting transport.

Línea Directa Aseguradora has just held a debate focused on road safety amid the emergence of new forms of mobility, especially in relation to Personal Mobility Vehicles (PMVs), the use of which has been booming in recent years.

The event, which was held this morning in the “Veles e Vents” building of the Marina of Valencia under the slogan “Towards sustainable, safe and connected urban micromobility in Valencia: road safety challenges facing the city amid the use of Personal Mobility Vehicles", also coincided with the recent launch of “Vivaz Safe&Go”, the event sponsor. "Safe & Go" is the first insurance aimed at PMV users (scooters, bicycles, skates, segways, unicycles and hoverboards), that to cover the individual and their mobility rather than the actual vehicle. The insurance can be arranged as and when needed (on demand), thus responding to the challenges raised by urban mobility.

This morning's round table was attended by four prominent government figures: Roser Obrer, Director General of Public Works, Transport and Sustainable Mobility of the Generalitat Valenciana; Giuseppe Grezzi, Councillor for Sustainable Mobility and Public Space, Valencia City Council; Aarón Cano, Councillor for Citizen Protection, Valencia City Council; and Eduardo Olmedo de la Calle, Delegate Provincial Prosecutor for Road Safety in Valencia. Event moderator, David Pérez Renovales, Managing Director at Vivaz, the insurance brand of Línea Directa Aseguradora, remarked that “due to its climate and tourism, Valencia is an ideal city for the use of this type of vehicle. Furthermore, it is immersed, as a city, in the great challenge of transforming mobility. We must reflect on what challenges its citizens, administrations and companies will have to face in order to combine sustainable mobility with safety and what we can do to replace the most polluting vehicles”.

An accident rate on the rise

The increasingly widespread use of PMVs and the absence of clear regulations has led to a steady increase in the accident rate over recent years. As they are unregistered vehicles for which insurance is not compulsory, there are no official figures on the accident rate, although Línea Directa Aseguradora estimates that in the last three years there have been some 1,300 accidents involving PMVs users and at least 16 deaths.

Notably, the Valencian Community has the highest number of scooter accident fatalities in Spain, according to various reports. According to data made public by the Valencia City Council's Department of Citizen Protection, accidents involving scooters have increased fivefold in 2020. In 2017, there were only nine accidents involving electric scooters; in 2018 that figure had already risen to 72; in 2019 it climbed to 368; in 2020, despite the lockdown, it climbed further to 469, and so far in 2021 there have already been 518 claims (figures as of October 31).

From the City Council the concern about this increase in the accident rate is such that Aarón Cano, Councillor for Citizen Protection of the Valencia City Council, has assured that they have already begun "to carry out speed controls for these vehicles and we are going to start with alcohol controls and drugs”.

Valencia, with Mobility Rules in place since 2019

The city of Valencia is currently governed by a set of Mobility Rules that took effect in June 2019. For the first time, Valencian legislation would regulate the use and circulation of PMVs, explaining where they could be driven or ridden and regulating also the rental of driverless vehicles on the street, among other matters.

Valencia is a rare breed if we compare it with other towns and cities across Spain, as there is an abundance of local regulations and ordinance on PMVs. It is also one of the few municipalities that expressly includes the use of PMVs in its traffic ordinances.

This has been confirmed by Giuseppe Grezzi, Councillor for Sustainable Mobility and Public Space, Valencia City Council: “Our ordinance was ahead of other municipal regulations, trying to adapt to the paradigm shift in mobility and in favor of sustainable mobility. We force the use of helmets to VMPs that can go over 25 km/h, among other measures, and we also set out a series of rights and duties that users of this type of vehicle have to follow”.

Despite this, Eduardo Olmedo de la Calle, Provincial Delegate Prosecutor for Road Safety in Valencia, has stated that “the legality must be adapted to the reality of these new vehicles and their accident rate. The existing regulations are not enough, we must modify the penal code, to include the possible crimes committed by this type of drivers. In addition, for me, three things are of vital importance: to be able to identify drivers through a license plate, to have compulsory insurance and a minimum training in road safety”.

Regarding the importance of training, Roser Obrer, General Director of Public Works, Transport and Sustainable Mobility of the Generalitat Valenciana, has commented that from the Government of the Community “in addition to the aid for the purchase of these vehicles that we launched in 2020 and in which we continue working, we need to continue promoting awareness and that its users have some training, that is why we have launched initiatives for training and dissemination in schools and institutes ”.

In line with its commitment to road safety and sustainable mobility, Línea Directa Aseguradora has launched "Vivaz Safe & Go", the first 100% digital insurance aimed at PMV users: scooters, bicycles, skates, segways and unicycles, among others.

The new product, which will be marketed through Vivaz, the Group's Health insurance brand, revolutionises the concept of insurance in Spain, since it covers individuals and their mobility and can be taken out on demand under the ground-breaking concept of "on/off" or pay-per-use insurance: by the second, by the minute, or for a whole year. Users can effectively turn their insurance on and off using the Safe & Go App and pay only for the actual time they use their PMV on each trip. They can also check their routes and manage their policies digitally 24 hours a day, without having to make any phone calls. This includes taking out insurance, reporting an accident or claim and consultig payments, among other options.