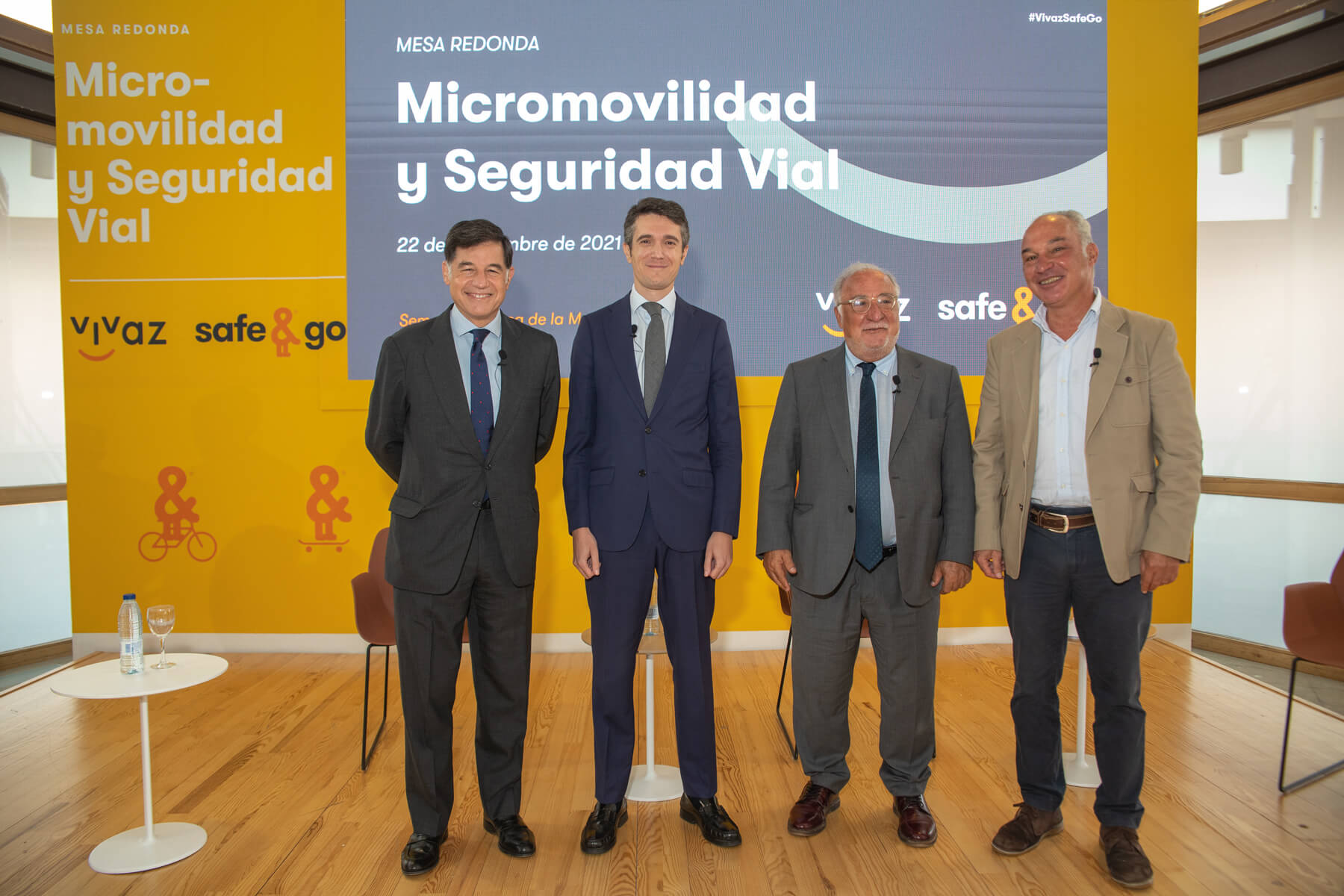 Pere Navarro, Director-General for Traffic: 'In Spain, compulsory insurance for PMVs is already on the agenda. City Councils are asking for it, along with the Prosecutor's Office'

Madrid, 22 September 2021. Urban planning, mobility, road safety and technology are evolving and transforming at breakneck speed. But the key question still remains unanswered: how do we combine sustainable mobility with road safety? To look into this challenge and at the same time as European Mobility Week, Línea Directa Aseguradora wanted to start a public debate to face the challenges that cities face in terms of road safety and new forms of mobility, especially in relation to Personal Mobility Vehicles (PMV), which have boomed in recent years.

The meeting, held this morning by the Official College of Architects of Madrid (Colegio Oficial de Arquitectos de Madrid) under the title “Towards sustainable, safe and connected urban micro mobility: challenges for cities in terms of PMV road safety", also coincided with the launch of "Vivaz Safe&Go", which sponsored the event. "Safe & Go" is the first insurance aimed at PMV users (scooters, bicycles, skates, segways, unicycles hoverboards), which covers individuals and their mobility and not the vehicle itself, which can be taken out on demand, in response to the challenges posed by urban mobility. The meeting was attended by three important figures from the Public Administration, such as Pere Navarro, Director General for Traffic, Federico Jiménez de Parga, Coordinator of Mobility at Madrid City Council, and Jaime Moreno, Director General for Land Transport at the Ministry of Transport, Mobility and Urban Agenda.

The round table was overseen by David Pérez Renovales, CEO of Vivaz, the health insurance brand of Línea Directa Aseguradora, who stressed that "Mobility in cities in recent years has undergone a total transformation. Our duty is to reflect on what challenges citizens, Administrations and companies will have to face in order to combine sustainable mobility with safety and what we can do to replace the most polluting vehicles".

Currently, there is a wide and scattered range of regulations on PMVs across various municipal ordinances. Few municipalities expressly include the use of PMVs in their traffic ordinances, so there is a sort of legal vacuum around their use, which causes legal insecurity, uncertainty and a lack of awareness of traffic regulations.

The figures for PMVs are starting to become significant, since in the last three years more than 800,000 electric scooters have been sold throughout Spain. In fact, cities such as Madrid, Zaragoza, Tarragona, Malaga, Seville, Gijón or Alcalá de Henares tender around 10,000 licenses for the shared use of this type of vehicle.

Jaime Moreno spoke about how PMVs can be integrated into the public transport network, as a solution for reducing traffic congestion. Not surprisingly, one of the main areas to be worked on as part of the 2030 Safe, Sustainable and Connected Mobility Strategy is road safety and the promotion of the use of non-polluting vehicles. Moreno insisted that 2030 was set as the year the Executive chose at the beginning of the legislature for when multimodal mobility will be a reality. "The pandemic has brought about an important change in the mentality of users, since we have seen a huge increase in the number of cyclists, and PMV users".

The additional problem posed by the proliferation of PMV sharing companies was another topic discussed during the meeting. Among the measures adopted to manage these vehicle fleets, Federico Jiménez de Parga insisted that in Madrid, "there are currently 14 companies, with 4,800 scooters, but we want to limit this as they have done in Paris, which only has 3 operators, with a maximum of 15,000 scooters (5,000 each)". The Coordinator of Mobility at Madrid City Council stated that the measure will enter into force within a year.

The proliferation of the use of PMVs and the absence of clear regulations has led to a progressive increase in the accident rate in recent years. Since these are unregistered vehicles where insurance is not compulsory, there is no official accident rate data, but Línea Directa Aseguradora estimates that in the last three years there have been some 1,300 accidents involving victims using PMVs and at least 16 deaths.

In line with its commitment to road safety and sustainable mobility, Línea Directa Aseguradora has just launched "Vivaz Safe & Go", the first 100% digital insurance aimed at PMV users: scooters, bicycles, skates, segways and unicycles, among others.

The new product, which will be marketed through Vivaz, the Group's Health insurance brand, revolutionises the concept of insurance in Spain, since it covers individuals and their mobility and can be taken out at the customer's request under the revolutionary concept of "on/off" or pay-per-use insurance: for seconds, minutes or for a whole year. To do this, the user can activate and deactivate their insurance through the Safe & Go App, paying only for the actual time they use their PMV on each trip. In addition, they can also check their routes and manage their policies digitally and without having to make any phone calls, 24 hours a day. This includes taking out insurance, registering an accident or consulting payments, among other options.